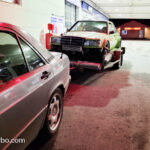 Engine:
Bought a om603 engine picked up about 500km from home, the engine has previously been used with a 7.5mm Dieselmeken, but ran great and appears to be in good condition.
Took a lot of searching before i was able to find a om603 engine in good condition.
Also got a new head, so will start by refurbishing that, and try that out and hope that the bottom end of the engine hasnt been damaged previously.
The pistons all came up to the same height, so unless all of them are bent to the same degree the bottom end should have survived. but this is a possibility that would explain the low compression on all cylinders (besides the warped head)
Mounting hardware, valve-guides bought and head will be refurbished completely before mounting.

Gearbox:
The old preasureplate + clutch wont survive a bit harsher driving without slipping.
Bought a new gearbox GS6-37dz to replace a noisy 717.404 aswell as get a sixth gear with overdrive.
Sachs 765 preassureplate + Sinter-clutch

Cooling:
Started building a new shroud and fastener for a large Ford Mustang radiator in the trunk, will have to redo the entire piping due to it cracking during the winter since no anti-freeze was used.

Brakes
Will start out with new calipers+brakediscs for the Volvo-rear end in the rear,
front will at the start be the 294mm 4-pot brakes from a 300E-24v, but have started looking at the S500 w220 calipers to pair along with 330mm front discs.
Might also get dual-set of calipers and running separate line+calipers for the handbrake to not mix those together.

Tires:
A set of sticky R-tires bought, also found a set of Carlsson wheels to fit those on.