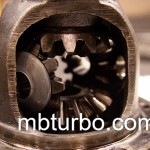 get the center differential thingy loose, remove the crown-gear (isch)

get the -lock- out of the differental pinion shaft rotate the gears slowly, to far and they might fall out.
(here i already got the new thrust rings in) go the other way around to get it back together… old vs new thrust rings, these looked good, but since i had it apart, i might as well change them… the center reassembled and put back in the housing missed to take a picture of the bearing part, but that obviously goes in before the one above.

we modded a tool to be able to remove/put those back, they are strong, you will need a special tool for that part. yeah, i didnt clean the outside of the housing, since the car is oily and rustproofed underneath, that little dirt wont make any difference. 30mm socket for the flange/yoke whatever on differential and some gearboxes, welded a lug on, drilled throu it so it could reach, and used a second socket on the lug..

7 thoughts on “Overhauling a differential”