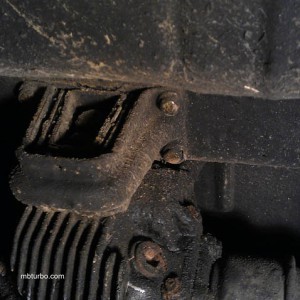 When i searched for instructions, I could’nt find any, so i took some photos during my change, hopefully it will help some of you with your projects.

Instructions how to change on a w123 When shifting final-drive to one from a v8 car, you have to change the flange (the thing you bolt to the hardy disc) since the flange are bigger on the V8s, when changing the flange you will have to get data on what torque the bolt

Changing differential on a stricht acht Start by getting the wheels up from the ground, and remove the bolts holding the driveshafts, on my w114 from 1968 the bolthead was 17mm, on my w115 230:4 it was 13mm, so there is a difference in driveshafts, so dont toss the bolts away if you have spare ones. I hope the splines should be the same, something i will find out tomorrow otherwise. Remove the exhaust and the bolts connecting the yoke to the hardy-disc, this is important to do before removing anything else

17mm nuts, and 15mm bolts, these are finethreaded m8s if i remember correctly

use a prybar or something else to get the flanges free from the disc, the disc has these parts that moves into the flanges when tightened, if rusty, they will stick good, and be a pain in the ass to get loose, dont give up.

if you dont remove this before lifting the diff down, any bending will go to the rubberthingy holding the cardanshaft in place, those are prone to brake, so unnecesary force on those is prefered. I also got the jack in place, since it’s needed later on anyway. Remove the matt in the trunk, at the far end you will find four holes (hopefully covered with something) these nuts are 19mm in size, and for the two furthest in you will need something like this
The back of the seats in the sedan makes it impossible to use a regular socket-wrench and it is way to tight to unscrew the nuts from underneath the car, unless you put a jack under it, removes the four m8 bolts and slowly lower everything, this is necessary on a w123 chassi, since they dont have the holes to acces the m12 from the trunk. Next step is to loosen the four m8 bolts (13mm) that holds both the final-drive and the suspension in place, without the jack underneath the finaldrive, the whole thing will fall towards the ground, potentially damaging the driveshafts. it also makes the unscrewing a bit harder if the final-drive is constatly pressing against the bolts.

Didnt take a picture while taking down the differential, i lowered it a bit and used a metalpipe to knock on the driveshafts so they got out a bit, lowered, knocked, lowered until the driveshafts was loose, be careful not to damage the “brakepipes” Here i have a piece of bord holding the exhaust up, as well as on jack holding the suspension “bar” up, without the jack in place, the springs will push the “bar” down, the jack has to be in place the whole procedure of lifting down the final-drive.

it doesnt realy if you have the car high up, but i found it easier to get the four studs on top out of the bar if it didnt flex, as it does if you let the springs push it down.